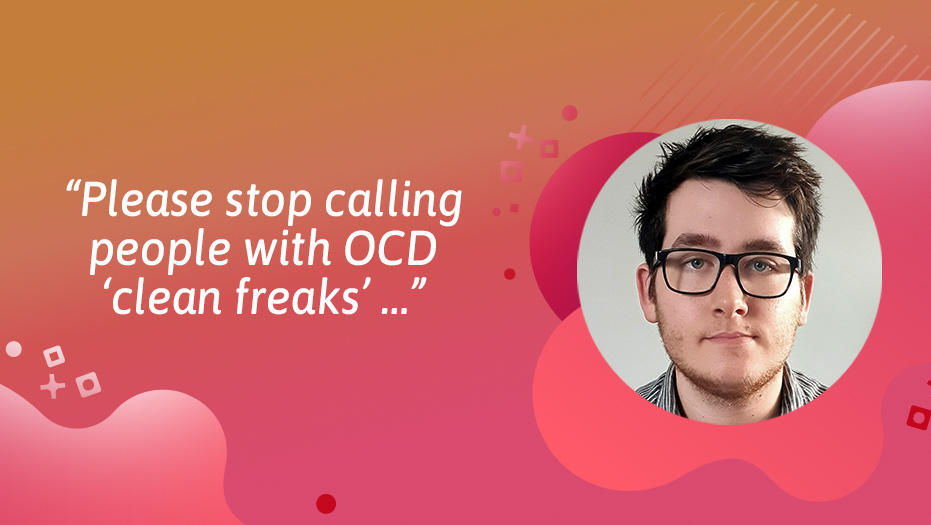 My OCD is the type that most people think of when they say things like ‘I’m so OCD’, because it involves routines around hygiene, such as handwashing. But the idea that being OCD is basically being a ‘clean freak’ really undermines how debilitating and frightening it is.

My OCD began when I was around 12, and the H1N1 virus (Swine flu) was around. I remember my dad told me to sanitise my hands after touching things. I found it bit scary because I didn’t understand what was happening.

From there, I had a very slow increase in symptoms, which focused on being contaminated by people’s saliva.

The thoughts would go something like this: a teacher would lick her finger before giving me a paper handout in class. In my mind, the paper and her finger would be contaminated, and anything else that touched those things would become contaminated. It branched out and out until everyone on the planet was contaminated with saliva.

I always knew it wasn’t rational or correct, but it felt so extremely real and frightening.

It got to the point where I would have to clean anything I thought was contaminated by saliva. A lot of the compulsions were around avoiding things – like never touching door handles, because in my mind, they would definitely be contaminated.

I would use antibacterial disinfectant products on my belongings, and wash myself with antibacterial soap in extremely hot water.

"During this Covid era, I know there will be people whose OCD has been triggered by the increased awareness around hygiene. I also know many people will be suffering in silence."

When I was 14, I was diagnosed with OCD, and with the help of medication, my symptoms almost disappeared. But less than a year later, they came back. This time, it was centred on faeces and urine. I’m not actually scared of getting sick, it’s just that feeling of dirtiness and being contaminated.

Wherever I go, my mind sees urine and faeces all around me - on the street, in the bushes. It’s stopped me doing a lot of the stuff I enjoy, like biking and skateboarding.

To manage my OCD, I have to constantly expose myself to my fears. When I’m in my safe, clean house I’m very comfortable and happy. But I have to make myself go out, because that’s how to overcome the intense anxiety.

During this Covid era, I know there will be people whose OCD has been triggered by the increased awareness around hygiene. I also know many people will be suffering in silence. OCD thrives in times like lockdown, because you can avoid going out. But in the long term, that just makes it worse – the things you do to avoid your thoughts and feelings, is what actually keeps them going, so it becomes a cycle.

About 1 percent of people have OCD, so I know that I have met others with the same struggles as me, but it’s something we try to keep secret. That’s why I’m telling my story – I want others to know that their suffering is real, they are not alone, and they can get help.