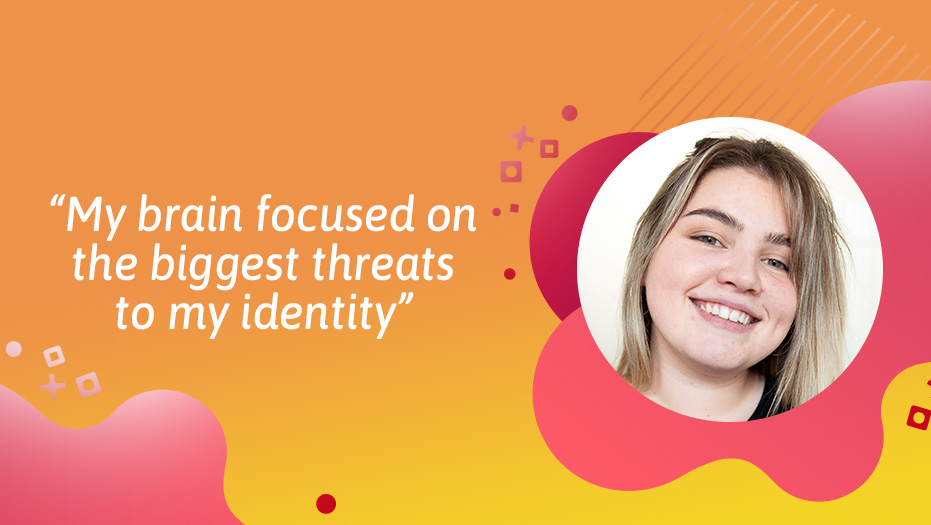 I’ve probably had about five OCD themes – it’s a bit like wack-a-mole: you spend all your time and energy trying to get rid of one and another one just pops up.

I first noticed it when I was about 14. I come from a Christian family, and one night read in the Bible that women during that time had been told to shave their heads. I felt a huge fear of, "what if I'm supposed to shave my head". This turned into obsessive thoughts and ruminations about breaking the rules and not being ‘good’ if I didn't follow the rules.

Then, at 18, I had the thought: ‘what if I’m attracted to females?’ For a number of years, that became the prominent OCD theme. Even when I liked a boy, feeling anxious meant I didn't feel attracted to him. I would swing back and forth between, ‘that must mean I’m attracted to women,’ and, ‘but I have had crushes on boys’. My mind would just go round and round, constantly analysing. If I thought about it enough, maybe I would figure it out.

When you're anxious, you feel all these bodily sensations - a constant feeling of grossness and like something is wrong.

"I was really angry because I had spent many years running away from those thoughts, and now I was being told to face and engage with them!"

OCD thoughts can focus on perceived threats to who you are. So, there are LGBTQ+ people whose obsession is that they’re actually straight – because that’s the threat to their identity.

My turning point came when I went to see a psychologist: they diagnosed me with OCD and suggested exposure therapy. At that time, I was really angry because I had spent many years running away from those thoughts, and now I was being told to face and engage with them!

My first exposure task was to go out on the street and identify what I thought was attractive about women. I was terrified. But my best friend suggested she do it too, and that made it less threatening.

I did about 6 months of exposure therapy, and it really reduced those thoughts and helped me manage the feelings of anxiety.

At one point, I told my psychologist, ‘I wish I could just shut down that part of my brain’. But they said, ‘Well that’s also the part of your brain that tells you when you’ve left your keys behind’. I was learning that it is OK to have anxious thoughts and to sit with them.

Exposure therapy was helpful with the homosexuality OCD. However, when I started dating someone, the OCD found a new ‘mole’ that popped up - it started to focus on the relationship.

"I’ve had OCD themes of religion, homosexuality, pedophilia, relationship, and health – all of them based on a perceived threat to me and my identity."

I think the core fear is of being in the wrong relationship or hurting someone. So, you have all the normal anxieties of getting into a new relationship – like, is this the right person for me? But my brain can’t handle the uncertainty, so it just goes round and round. My brain is telling me that if I think about it enough, I'll figure it out and stop feeling like this.

In the past, I would just drop the relationship. Now, I’m trying to learn to live with that feeling of uncertainty.

During COVID, health OCD has also developed. In total, I’ve had OCD themes of religion, homosexuality, pedophilia, relationship, and health – all of them based on a perceived threat to me and my identity.

Today, I’m actually a therapist, helping others with their mental health. I would say I live with OCD, but I am much more able to manage it - it no longer controls me.

*Name has been changed.